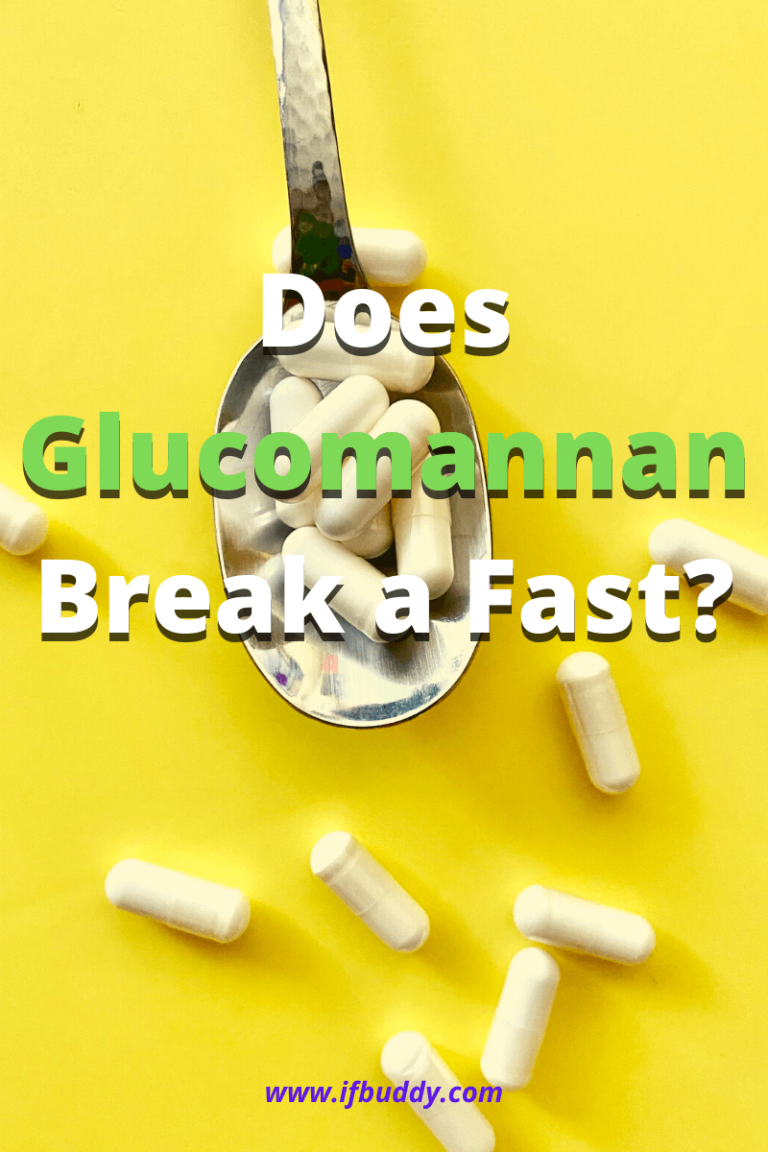 Intermittent fasting is a great diet if you want to lose weight or balance blood sugar. However, that doesn’t mean it is a cure for everything and sometimes you may find yourself wondering what supplements are allowed to take during a fast. The most common rule is that you need to stay as close to zero calories as possible while you fast. Occasional exceptions can be made depending on the reasons why you’re fasting and the type of intermittent fasting diet you chose. One fairly well-known name in the world of fiber supplements is glucomannan. So, does glucomannan break a fast?

The answer depends on several factors. Most glucomannan products have 5-10 calories per serving which mostly come from carbs. If you’re on a classical fasting diet that requires you to stay under 1-2 calories, then glucomannan will break a fast. Otherwise, you may be ok, as this is a fiber supplement that is not digested by the body so it provides no nutrition.

So let’s explore this topic further and see when is it ok to take glucomannan, what its benefits and side effects are, and how it works compared to other types of fibers.

Glucomannan is a natural water-soluble dietary fiber also known as konjac. It is extracted from the roots of elephant yam and it is available as a standalone supplement in various drink mixes, but konjac can also be found in foods such as flour or pasta. Something less known is that glucomannan is also used as a food additive.

As a supplement, it is used for gastrointestinal health in conditions like IBS-D or IBS-C, but it is also used for weight loss because it improves digestion. Like all water-soluble fiber, it also provides a feeling of fullness, helping you manage cravings.

Does glucomannan break a fast?

Water-soluble fibers are generally considered safe during a fast. In fact, most of them are meant to be taken on an empty stomach. They also make you feel satisfied immediately after consuming them, so they’ll make your fast easier.

Glucomannan has about 5-10 calories per serving, and some of them come from carbs. This is one of the things you need to consider when figuring out if it breaks your fast or not. The most strict intermittent fasting diets allow for a maximum of 1-2 calories during a fast. In other words, you need to aim to be as close to zero calories as possible. With 5 calories per serving, glucomannan will technically break this type of fast.

Other intermittent fasting diets are more permissive. For instance, some methods allow you to consume up to 50 calories during a fast. Obviously, the 5 calories from glucomannan would be perfectly allowed in this case. Other methods allow you to consume certain foods as long as they don’t cause an insulin response. Does glucomannan cause an insulin response? No, it shouldn’t because it is a water-soluble fiber that is not digested. If you’re fasting for blood sugar management on a doctor’s recommendations, you should talk to them first, but in most cases, fiber, including glucomannan, is considered safe.

Glucomannan and Fasting: How effective is it?

Glucomannan can help you when fasting because it makes you feel full and it curbs cravings. That being said, you shouldn’t rely on it every day as this can be dangerous and can lead to under-eating.

Does it truly curb your appetite? It does, but don’t expect miracles. It has no impact on your blood sugar, so if your hunger led you to symptoms of hypoglycemia, glucomannan won’t be able to help you. However, it slows down the emptying of the stomach and will make you feel fuller throughout the day, allowing you to reduce the overall calories you eat.

The usual recommendation is to take glucomannan 15 minutes to an hour before a meal. So if you’re hungry 5 hours before your fasting window ends, relying on this supplement won’t be very helpful.

Benefits & side effects of glucomannan

Because it makes you feel full longer, one of the first benefits it has weight loss. However, if you want to lose weight, you’ll need to take it before a meal, otherwise, it won’t be very effective in this regard. And this isn’t its only use. Glucomannan is great for digestive health, especially constipation, but it can also prove to be useful for those who suffer from diarrhea.

Keep in mind glucomannan mixed with water can expand up to 50 times, so you’ll need a much lower dose than you would  of other similar fibers.

Side effects are usually mild and they include bloating, flatulence, and diarrhea. It can also impact the absorption of certain medications so take them at least 4 hours after or 1 hour before glucomannan.

Glucomannan vs. Psyllium Husk: Which is better? 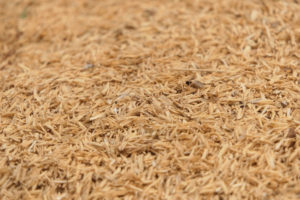 The two fibers are fairly similar and have more or less the same benefits: weight loss, lower cholesterol, triglycerides, fasting blood glucose, and relieving constipation as well as other GI tract issues.

In terms of weight loss, glucomannan has proven to be slightly more effective than psyllium husk. However, some say the risks with glucomannan are also a little higher. The dramatic expansion in the stomach – up to 50 times – can cause more side effects, especially if taken incorrectly,

Determining which one is best is something only you can do. They both have incredible benefits, both for weight loss and health, proven by several studies. So you just need to figure out which one you like more, which one makes you feel your best.

Which Glucomannan product for Intermittent Fasting?

The best product is the one with the lowest amount of calories per serving. The best product that I found was the one from “NOW”. It has only 5 calories/serving. You can buy it on Amazon here. 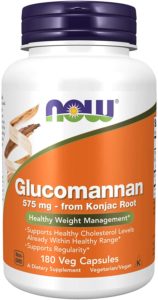 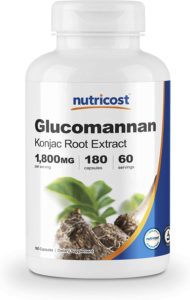 Does glucomannan break a fast? The answer depends entirely on the type of intermittent fasting method you choose. If you can consume 5 calories, all coming from carbs during your fast, then you’re safe. Remember that for the best effect you need to take glucomannan 15 minutes to an hour before the first meal. It is not a meal replacement, so don’t rely on it if you’re starving or hypoglycemic.

Taken correctly, glucomannan has a lot of health benefits from weight loss, lower cholesterol, and even lower fasting blood glucose. Finally, side effects are rare, but if you find you experience any, reconsider the dose or simply switch to another fiber.